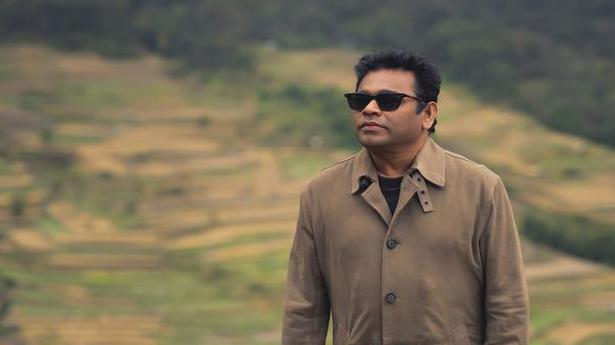 Composer AR Rahman, whose inspiring story will be part of a 40-minute documentary episode, revisits his musical journey and memories with late singer SP Balasubrahmanyam

“It is supposed to be played like this,” says percussionist Thumba Raja holding up a risa risa. The hand-held instrument, a hollow wooden cylinder with indentations on its surface, has an accompanying stick which is run along the surface to create a light percussive sound. “But, in Rahman’s recordings, I play like this,” says Raja, wedging the instrument between his thigh and that chair and proceeds to strike its hollow top — creating a muffled percussive sound that has never been heard before. That is AR Rahman for you. And, this scene from an episode of National Geographic’s Mega Icons Season 2 about the composer’s journey, rightly captures his creative whims.

Shot in the style of a documentary, the episode promises to be a comprehensive retelling of Rahman’s journey. And, the pitfall of being comprehensive? Most of what is told is already known to an Indian audience. But, for an international audience, the narrative takes a fresher’s course on the musician.

‘SPB was a superman’

A big part of what Rahman remembers from his childhood is taken up by his father RK Shekhar’s battle with cancer for three years. “But, the aura of his [father’s] musicianship and humanity set up the whole foundation for my character. Everyone in the studio would talk about how he used to help the them and how amazing he was,” says Rahman, wearing his characteristic smile in an interview over a Zoom call from his Chennai home. He had just finished his evening prayers.

“My mother [Kareema Begum] had suffered a lot of humiliation. After my father’s passing, she was in control of business, renting out the equipment and some of the relatives were jealous of it. But, she stayed strong and lived for us [him and his sisters] and is still living for us,” he continues.

His mother was also the one responsible for pushing him to take up music professionally, as early as when he was an eleven-year-old, carrying rented equipment for concerts. And, while receiving the Oscar in 2009 for Best Original Score and Best Original Music Score for Slumdog Millionaire, as part of the acceptance speech, he said, “Mere paas maa hai [I have my mother with me].”

In 1989, he set up his first home studio in Chennai (Panchathan Record Inn). A one-man space, the studio would often see Rahman flit between multiple roles — from recording and editing to arranging and even propping up the mic. “What it taught me was to be independent, to be free. The freedom of not getting judged by others and listening to your own thing; that’s what changed me. It’s unfortunate to see that a lot of people still need someone to do things for them, like even setting up a chair. But, if I have to set up a mic stand, I do it myself.”

In fact, he enjoys the seclusion. “I don’t want 10 people hanging around with me. When I am ideating, I like to be alone,” says the composer.

The musician does not like to plan — “My mind sets a tone. There are many gurus for every creative person. Even though we don’t directly get influenced, we are indirectly inspired by different collections, groups and bands. Then you play with the tools and see what can be done.” The sound of Michael Jackson particularly inspired him. “The production, perfection, detail and how it would pop out of the speakers was just fascinating. Not just as an artiste but how under his umbrella, people excelled. That set an example for us. Even now, when we want to test a speaker, we play Michael Jackson.” The way he grew up — drenched in different musical influences — lends to his ability to manage multiple genres.

Looking back, what does he consider his biggest achievement? “The best is always yet to come,” he says with a smile. He believes that he has been lucky in this journey: “Getting everything mostly on the first attempt — be it my first movie, Western musical or Hollywood movie.”

2020 too has been a busy year — from finishing the track ‘Hum Haar Nahi Maanenge’ to revisiting the ambitious virtual reality musical Le Musk, currently in post production. “The tools are changing, and it is becoming cheaper and less cumbersome,” explains Rahman.

“One of the beautiful things I learned this year is that ‘the moment you know that you know is when you don’t know. The sense of discovery is more interesting in life than knowing something absolute,” concludes Rahman. “It creates curiosity and this creates the art… the ‘what if’.”

AR Rahman’s episode in Mega Icons Season 2 will premiere on National Geographic on October 4, 7pm. It will also be available on Disney + Hotstar VIP.

Ola’s first electric scooter will be launched in the Indian market in January next...

Paytm hiring over 1,000 people to support expansion across businesses

Telecom subscriber base falls to 116.3 crore in May; Reliance Jio,...