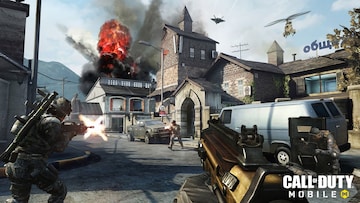 Call of Duty: Mobile features classic locations from the earlier versions of Call of Duty

Call of Duty: Mobile, the first-person shooter gamer developed by Tencent Games-owned TiMi Studios, has surpassed the mark of 35 million downloads on Android and iOS combined, publisher Activision has announced. The new downloads record follows the 20 million installs that were reported within two days of the launch of Call of Duty: Mobile that debuted at the beginning of October. The early achievements are quite enthralling for the mobile game that comes under Activision's popular Call of Duty series. However, its latest update has invoked criticism among gamers since it has disabled controller support.
Activision has touted that Call of Duty: Mobile is ranked as the number one on the App Store in more than 100 countries worldwide. The game supports both iPhone and iPad models -- alongside Android devices.
"The response from fans across both Android and iOS has been amazing," said Rob Kostich, President, Activision, in a statement. "This is an incredibly fun experience, and we're only getting started. Congratulations to the teams at Activision and at our partner Tencent's TiMi Studios for making such a great game for players. And special thanks to our fans for their continued support."

Finest Member
Wow. I will install it once my theory exams get over..

Otaku said:
Wow. I will install it once my theory exams get over..
Click to expand...

you are in school or college bro?

EntMnt Staff
Call of Duty is the new PubG.

Ken said:
you are in school or college bro?
Click to expand...

Birthday Boy
I already have the game only the multiplayer is good in this game. Battle royal is worst no where near pubg

So, you plan to stick with PUBG and not continue with COD?

IndianMascot said:
So, you plan to stick with PUBG and not continue with COD?
Click to expand...

I am playing both games whenever i get time

I was expecting this reply only.