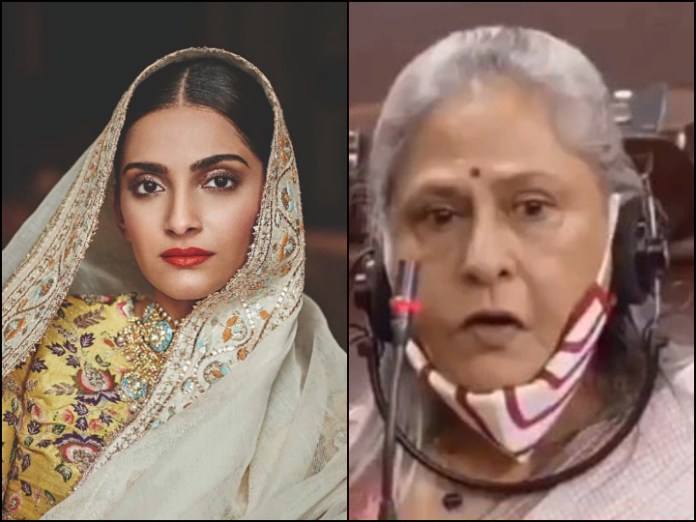 New Delhi: Veteran actress and Rajya Saba MP Jaya Bachchan slammed the people, who are tarnishing the image of Bollywood while speaking in the Upper House on Tuesday (September 15). The ‘Sholay’ actress said that the people working in the entertainment industry are being ‘flogged by social media’. She added that the film industry brings fame and recognition to the country and the government should provide protection and put a stop on the unending bashing faced by the artists working in Bollywood.

Sonam Kapoor, last seen in ‘The Zoya Factor’, extended support to Jaya Bachchan on Twitter. She re-tweeted the video shared by director Anubhav Sinha and said that she wanted to be like Bachchan when she grows her.

“I want to be her when I grow up,” the ‘Veere Di Wedding’ actress wrote on the micro-blogging site. Check out her tweet!

“Respect. She has always stood up to be counted when it mattered,” Farhan Akhtar tweeted.

BJP MP and Bhojpuri actor Ravi Kishan raised in parliament the issue of alleged drug menace in Bollywood that has emerged during the investigations of Sushant Singh Rajput’s death case. The actor had alleged a ‘conspiracy’ by China and Pakistan to destroy India’s youngsters and said that government must take stringent action against the people involved in drug trafficking.

Without taking names, Jaya Bachchan took an indirect jibe at Ravi Kishan and Kangana Ranaut for tarnishing the image of the industry, which has given them ‘name and fame’.

Also READ: ‘This Is What The Spine Looks Like’! Anubhav Sinha, Taapsee Pannu Support Jaya Bachchan’s Statements In Rajya Sabha

“I stand with JayaBachchanJ as Kangana Ranaut put it Bollywood is a Gutter so JayaJi said that Jis thali mein khate hai ussi mein ched nahi karte And those who hv made a name here don’t spoil the name of Bollywood as for drugs they made fleeting comments if they knw names namethem,” Nagma wrote.

Jaya Bachchan gave a Zero Hour notice in Rajya Sabha to raise the issue of an ‘alleged conspiracy’ to defame the Hindi film industry.

Came Across A Thali That Too After Sleeping With The Hero’: Kangana Ranaut On Jaya Bachchan’s ‘Thali’ Comment

‘This Is What The Spine Looks Like’! Anubhav Sinha, Taapsee Pannu Support Jaya Bachchan’s Statements In Rajya Sabha

Navalny says he can walk and recognize people as he eyes ‘clear road’ to...

Street Fighter 5 and PUBG are September’s PlayStation Plus games

It turns out Nvidia really is introducing a 12-pin power connector...