Finest Member
The wreckage of an Indonesian Navy submarine missing since Wednesday has been found on the sea floor and all its 53 crew are confirmed dead, Indonesia military commander Air Chief Marshal Hadi Tjahjanto said Sunday.
The news came a day after debris believed to be from the KRI Nanggala-402 submarine was found floating about two miles from the submarine's last known location in the Bali Strait, leading military officials to change the vessel's status from missing to sunk.
Indonesia's Rigel warship scanned the area with sonar, which uses sound waves to locate objects, and a magnetometer, Tjahjanto told a news conference. The MV Swift Rescue ship from Singapore then sent a remote operated vehicle (ROV) to get clearer underwater visual imagery, he said.

A rescue ship from Singapore sent a remote operated vehicle to get clearer underwater visual imagery of the sub.

The submarine was found at a depth of 850 meters (930 yards) and had broken into three parts, Indonesian Navy Chief of Staff Adm. Yudo Margono said.
Among the objects found by the search team was a submarine escape immersion suit, he said. "This suit is only used to escape in emergency situations. Normally it is stored inside the box, but since we found it outside we believe that the crew were going to wear it but they had no chance," he said.
Regarding the cause, Margono said "this is not a human error, but a natural/environment factor," but did not give further details.
Briefing journalists Saturday, the admiral said an explosion was not thought to have occurred on the submarine but that heavy pressure on the vessel likely caused it to crack.
Tjahjanto extended his deepest condolences to the families of the crew, known as the Golden Shark unit, and said all those on board would be given honors and an increase in rank.
The Indonesian government will work with the International Submarine Escape and Rescue Liaison Office, he said, "because to evacuate the Nanggala submarine we need international cooperation."

Indonesian President Joko Widodo offered condolences Sunday to the families of the crew, whom he described as the country's "best patriots."
"This tragedy shocked all of us. Not only the families of the 53 crew members... but also the entire Indonesian people," he said.
Hopes of finding any of the crew alive had already dimmed Saturday, when debris including a bottle of grease, part of a torpedo launcher, part of a metal tube, prayer mats and fuel were found floating at a location where the sea is 850 meters (930 yards) deep.
Authorities said earlier the submarine could not survive at depths beyond 500 meters. The crew were also expected to have run out of oxygen early on Saturday.
The German-made submarine lost contact during a military exercise in the Bali Strait early on Wednesday morning. 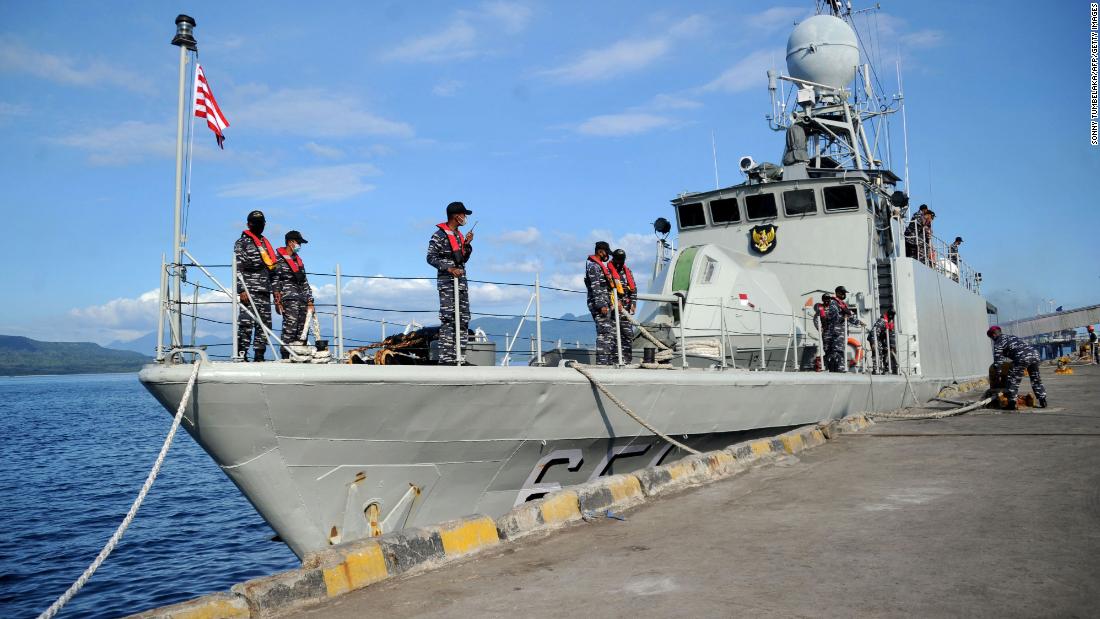 The wreckage of an Indonesian Navy submarine missing since Wednesday has been found on the sea floor and all its 53 crew are confirmed dead, Indonesia military commander Air Chief Marshal Hadi Tjahjanto said Sunday.