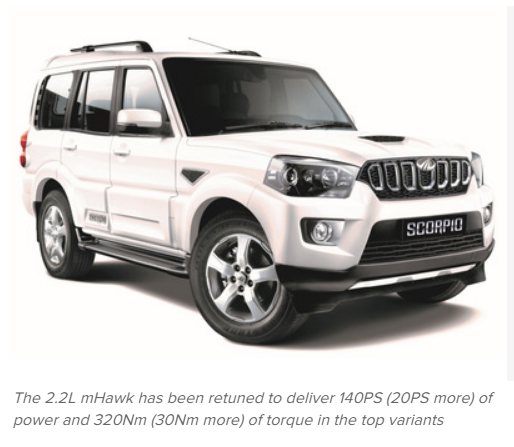 Mahindra & Mahindra Ltd (M&M) on Tuesday launched an updated version of its popular Scorpio. Starting at Rs 9.97 lakh (ex-showroom, Delhi) for the base S3 trim, the SUV is available in seven-, eight- and nine-seater configurations. The new model receives a host of cosmetic updates while the biggest highlight is increased power option for the higher S7 and S11 variants.

Under the hood, the new Scorpio gets the same 2.2-litre mHawk diesel engine which has been re-tuned to deliver 140PS (20PS more) of power and 320Nm (30Nm more) of torque in the top (S11) variant. The high power engine is also available as an option in with the mid S7 variant which is also available in 120PS, 280Nm version along with the S3 and the S5 trims.

The engine comes mated to a new six-speed manual transmission which is said to be more efficient and the S11 (top) variant also gets an option of all-wheel drive (AWD) transmission.

The exterior changes on the new Mahindra Scorpio include a redesigned grille with seven slats along with a tweaked front bumper and new projector headlamps. Moreover, the fog lamps, wing mirrors mounted turn indicators and the 17-inch alloy wheels are also new. The rear gets some minor tweaks in the LED tail lamps as well as the tail-gate.

#3
nah. will search form one to see once made available in mumbai roads

EntMnt Staff
#5
Target audience might be Travel companies and not individuals. Mahindra May tie up with Uber, Ola and other car rental companies for increasing sales
SAVE WATER.... WATER IS PRECIOUS
You must log in or register to reply here.
Share: Reddit Pinterest Tumblr WhatsApp Email Link