Realme has hit the mark of 17 million users globally with seven million people added in the last 90 days alone, India CEO Madhav Sheth announced through a tweet posted on Thursday. The Oppo spin-off brand came into existence back in May last year with the launch of the Realme 1. Soon after establishing its presence in India and China, the company expanded its portfolio and brought models such as the Realme 2, Realme 2 Pro, Realme C1, and Realme U1 soon after the initial success of the Realme 1.
Sheth through his tweet underlined that seven million new customers joined Realme in the last 90 days, and that the 17 million global users figure is also the number of its active users. However, the executive didn't reveal any market-specific data. This means that it's unclear that how many Realme users currently exist in India.

Madhav '5'Quad✔@MadhavSheth1
#realme family is now 17 million strong globally.
Infact 7 Million new fans joined us in just last 90 days!
These are the number of active users having realme smartphones in their hands. #DareToLeap 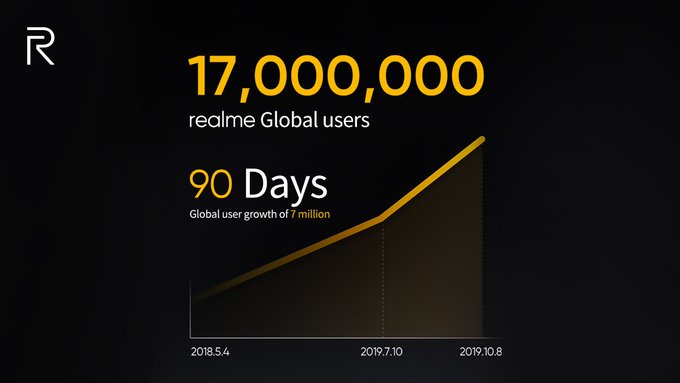 Alternate for redmi mobile is realme and it has struck the right cord. The parent company oppo itself positioned in the range of 20k and above.

Just a suggestion...
Do t go for Mediateck...go for Snapdragon only...

Vadirocks said:
RealMe! - Really A Good One?
Click to expand...

Vadirocks said:
RealMe! - Really A Good One?
Click to expand...

For me its better than MI

Finest Member
Any Android One Phones From RealMe?

Vadirocks said:
Any Android One Phones From RealMe?
Click to expand...